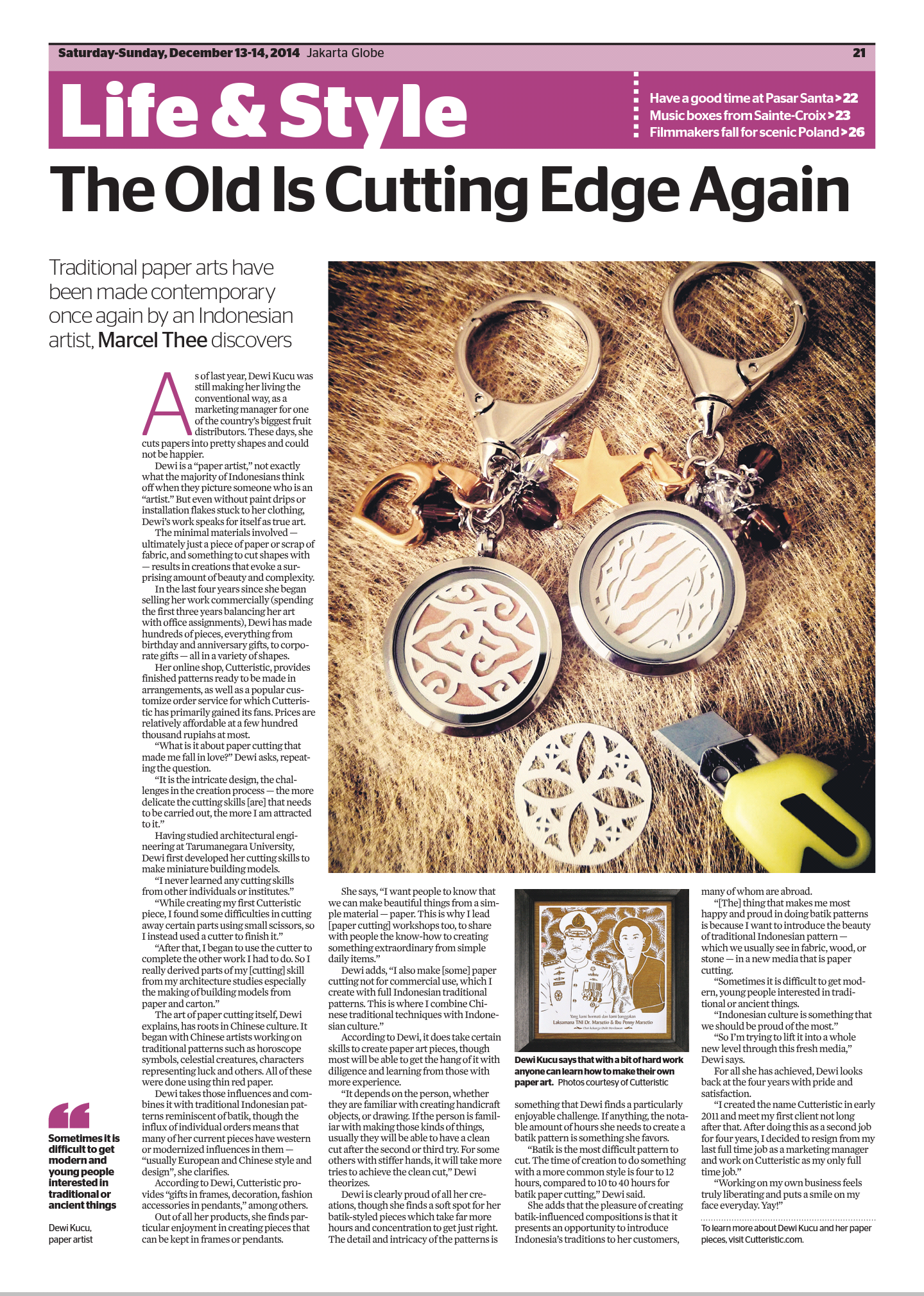 The Old Is Cutting Edge Again

Traditional paper arts have been made contemporary once again by an Indonesian artist, Marcel Thee discovers

As of last year, Dewi Kucu was still making her living the conventional way, as a marketing manager for one of the country’s biggest fruit distributors. These days, she cuts papers into pretty shapes and could not be happier.

Dewi is a “paper artist,” not exactly what the majority of Indonesians think off when they picture someone who is an “artist.” But even without paint drips or installation flakes stuck to her clothing, Dewi’s work speaks for itself as true art.

The minimal materials involved — ultimately just a piece of paper or scrap of fabric, and something to cut shapes with — results in creations that evoke a surprising amount of beauty and complexity.

In the last four years since she began selling her work commercially (spending the first three years balancing her art with office assignments), Dewi has made hundreds of pieces, everything from birthday and anniversary gifts, to corporate gifts — all in a variety of shapes.

Her online shop, Cutteristic, provides finished patterns ready to be made in arrangements, as well as a popular customize order service for which Cutteristic has primarily gained its fans. Prices are relatively affordable at a few hundred thousand rupiahs at most.

“What is it about paper cutting that made me fall in love?” Dewi asks, repeating the question.

“It is the intricate design, the challenges in the creation process — the more delicate the cutting skills [are] that needs to be carried out, the more I am attracted to it.”

“I never learned any cutting skills from other individuals or institutes.”

“While creating my first Cutteristic piece, I found some difficulties in cutting away certain parts using small scissors, so I instead used a cutter to finish it.”

“After that, I began to use the cutter to complete the other work I had to do. So I really derived parts of my [cutting] skill from my architecture studies especially the making of building models from paper and carton.”

The art of paper cutting itself, Dewi explains, has roots in Chinese culture. It began with Chinese artists working on traditional patterns such as horoscope symbols, celestial creatures, characters representing luck and others. All of these were done using thin red paper.

Dewi takes those influences and combines it with traditional Indonesian patterns reminiscent of batik, though the influx of individual orders means that many of her current pieces have western or modernized influences in them — “usually European and Chinese style and design”, she clarifies.

According to Dewi, Cutteristic provides “gifts in frames, decoration, fashion accessories in pendants,” among others.

Out of all her products, she finds particular enjoyment in creating pieces that can be kept in frames or pendants.

She says, “I want people to know that we can make beautiful things from a simple material — paper. This is why I lead [paper cutting] workshops too, to share with people the know-how to creating something extraordinary from simple daily items.”

Dewi adds, “I also make [some] paper cutting not for commercial use, which I create with full Indonesian traditional patterns. This is where I combine Chinese traditional techniques with Indonesian culture.”

According to Dewi, it does take certain skills to create paper art pieces, though most will be able to get the hang of it with diligence and learning from those with more experience.

“It depends on the person, whether they are familiar with creating handicraft objects, or drawing. If the person is familiar with making those kinds of things, usually they will be able to have a clean cut after the second or third try. For some others with stiffer hands, it will take more tries to achieve the clean cut,” Dewi theorizes.

Dewi is clearly proud of all her creations, though she finds a soft spot for her batik-styled pieces which take far more hours and concentration to get just right. The detail and intricacy of the patterns is something that Dewi finds a particularly enjoyable challenge. If anything, the notable amount of hours she needs to create a batik pattern is something she favors.

“Batik is the most difficult pattern to cut. The time of creation to do something with a more common style is four to 12 hours, compared to 10 to 40 hours for batik paper cutting,” Dewi said.

She adds that the pleasure of creating batik-influenced compositions is that it presents an opportunity to introduce Indonesia’s traditions to her customers, many of whom are abroad.

“[The] thing that makes me most happy and proud in doing batik patterns is because I want to introduce the beauty of traditional Indonesian pattern — which we usually see in fabric, wood, or stone — in a new media that is paper cutting.

“Sometimes it is difficult to get modern, young people interested in traditional or ancient things.

“Indonesian culture is something that we should be proud of the most.”

“So I’m trying to lift it into a whole new level through this fresh media,” Dewi says.

For all she has achieved, Dewi looks back at the four years with pride and satisfaction.

“I created the name Cutteristic in early 2011 and meet my first client not long after that. After doing this as a second job for four years, I decided to resign from my last full time job as a marketing manager and work on Cutteristic as my only full time job.”

“Working on my own business feels truly liberating and puts a smile on my face everyday. Yay!”

To learn more about Dewi Kucu and her paper pieces, visit Cutteristic.com.